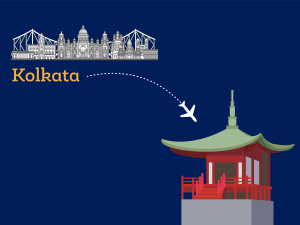 Do you intend to study Japanese as a second language? It is not necessary to travel to Japan and learn their native language. What you can learn in Japan may easily be learned everywhere you have an internet connection and a smartphone or laptop. The need for the Japanese language is expanding due to the growing demand in the job sector. So, in this article, let us have a look at the best venues where one can take up Japanese language course in Kolkata. As you may be aware, due to the current scenario, which is post covid, studying the Japanese language can be accomplished in one of two ways, either offline or online. However, due to the intricacies of the language, it is better to have instructor-led teaching to learn the language in both offline and online modes. Many training institutes offer teacher-based training models to teach the language offline and online.

Though there are a lot of benefits in learning a new language, let us quickly go through five major benefits of learning Japanese,

JLPT – Japanese Language Proficiency Test is the world’s most generally recognized certification of the Japanese language. The certification program comes up with five levels (N5, to and N1), each having its own difficulty. The base level of certification is N5, while the highest level is N1, which is the most complex. There are numerous advantages to becoming JLPT certified. You can get into many schools and colleges if you have two or three levels of JLPT certification. It can also assist you in obtaining employment in Japan. The most significant benefit of passing the N1 level is the ability to obtain a 5-year visa and the possibility of obtaining permanent residency in Japan. It also aids in the acquisition of visas for your spouse and parents.

Curiotory offers certification to learn Japanese from both native and Indian professionals. They provide a platform to register for the certification, provide material to learn the language, conduct instructor-led Japanese classes in Kolkata, with a predefined syllabus, and distribute certifications, which are of tremendous value globally.

Pros of learning Japanese with Curiotory:

How learning on Curiotory is better than other institutes?

Due to the below aspects, Curiotory stands far ahead in coaching individuals to learn the Japanese language. While other institutes in Kolkata offer similar syllabus structures, Curiotory’s teaching model is unique and different and is loved by all of the passouts of Curiotory.

Japanese, amongst many, is one of the most difficult languages to master. There are three different Japanese writing systems: katakana, hiragana, and kanji. Katakana and hiragana are phonetic alphabets, whereas kanji is a graphical representation of thought rather than a sound. Japanese also uses verbs after sentences, making it difficult for English-speaking children and young adults to understand. In addition to this, native Europeans also find it difficult to learn an East Asian language due to this factor. However, the Japanese language is simpler than English in terms of conjugations, pluralization, and tenses usage.

The ability to acquire new languages is influenced by a person’s age, just as it is with any other language. But this merely means that anyone can learn the Japanese language, no matter how old or young. Kids and young people learn faster because they can pick up new accents and sounds more easily than adults. Adults learn smarter with a situational grasp of typical discussions since their attention spans are longer.

As you may know, the world has been moving away since 2020, post covid. Even if there was no pandemic, it would have been only a matter of time before the learning journey was digitized. The future of language learning, or any other learning for that matter, is becoming increasingly online. People have less time to master them than before. As such, they rely on virtual platforms like Curitory to pursue travel and career opportunities from the comfort of their home. However, instructor-led virtual classes help individuals to converse with their teachers directly.

Learning Hiragana, Katakana and Kanji are possible by downloading course materials from the internet and watching video content on OTT platforms. However, keep in mind that there are three complex writing systems in Japanese, each with its own nuances. There is also a hierarchy of politeness that requires cultural awareness to understand. Therefore, if you want to hear, speak and understand Japanese correctly, please consider opting for instructor-led certification programs.