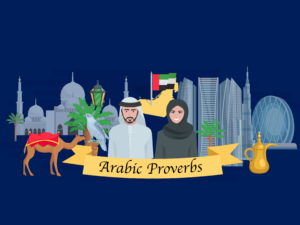 Proverbs are used in every language to convey something that is “common truth” and link with previous wisdom or expertise. It is thus not unexpected that many proverbs exist in many languages. This is because humans have always swapped and traded goods, not just in a commercial sense but language, literature, and culture were all included in these exchanges.

Studying another culture or language frequently entails learning their proverbs, which improves metaphorical and communication abilities. In addition, proverbs serve as everlasting instructional idioms that apply to the most common and universal human circumstances.

What are Arabic proverbs

It is reasonable to believe that most, if not all, Arabic proverbs are context-based, indicating that you may learn a proverb in addition to learning about its origins in history or culture. The roots of Arabic proverbs might be Islamic, pre-Islamic, Greek, or just folklore.

Inspirational quotes are significantly more unforgettable than the formal conversations typical of textbook languages. You may also see how much philosophy is shared between the target culture and your own by reading proverbs and sayings.

The wisdom of its poets and religious literature may be observed in innumerable proverbs and inspiring quotations from Arabic culture in particular. Therefore, if you want to learn Arabic effectively, you need to read common Arabic words and phrases and understand the meanings of the Arabic quotes in English translation.

So it is important to learn about Arabic proverbs as well as Arabic quotes, Arabic idioms, and Arabic sayings about life.

There are 30 contemporary variants or dialects of Arabic, a macrolanguage. Literary Arabic, also known as Standard Arabic or Modern Standard Arabic (MSA), is used in official speech and writing in the Arab world today, whereas Classical Arabic was used in Islamic literature from the seventh to ninth centuries. The Quran was actually written in the Arabic language.

Their soulful and meaningful Arabic quotes are still known today. Let us see the reasons why we should learn Arabic phrases and quotes to understand their native Arabic:-

It sets you ahead of everyone else: Learning Arabic will set you apart because relatively few Western individuals speak Arabic. Knowing Arabic will make you look intelligent and sophisticated. Learning includes being acquainted with the culture of the country in which the language is spoken. Arab culture is diverse and fascinating. Understanding the language will allow you to read some well-known classic literature.

Have a professional upper hand: You will have an advantage over the competition, Even if you do not live in the West. You might not believe it, but there is a great demand for Arabic speakers worldwide. Few Westerners are interested in learning Arabic and choosing it as their profession. Arabic speakers are needed in several fields, including translation and interpretation. Intelligence and foreign service, consultancy, banking and finance, education, and media are among industries that require Arabic speakers.

Arabic opens up new possibilities: You will be able to enjoy authentic Arab hospitality. Arabs are extremely proud of their language. Arabs, unlike Germans, get impressed when strangers speak their language. When a native Arabic speaker hears a foreigner say a few words in Arabic, they will be enthusiastic and delighted to help and support you learn their language.

Arabic lets you learn more languages: Did you know that studying Arabic may help you learn Farsi or Persian, Urdu, Hebrew, and Turkish? Between all of these languages, the majority of the grammar and vocabulary are quite similar.

How Can Proverbs Help You Learn Arabic?

Knowing some of the proverbs and wise sayings of a culture may teach you a lot about that culture. Arabic is an extremely cultured and fascinating language. Arabic is the official language of Middle Eastern nations, as well as the Mediterranean and North African countries. Arabic is also one of the oldest spoken languages, with a long history and culture. In the world, Arabic is spoken in around twenty-nine nations. Over 150 million people live in the Arab globe, and Arabic is the language they speak and write in.

Hence, to experience this as an Arabic learner, you should be good in the Arabic language and know at least a few Short Arabic quotes.

Some of the very commonly used Arabic common phrases are mentioned below, along with the meanings in English, including popular Arabic quotes about life:–

Literal Translation: If speaking was of silver, then silence is of gold.

English Equivalent: He who has understanding spares his words.

Literal Translation: You will know your friend in time of need.

English Equivalent: A friend in need is a friend indeed.

Literal Translation: Those who are close to you are more entitled to your charity.

“He who cooks his poison tastes it”

This expression means “what goes around comes around.”

Translation: You are the light of my eyes.

English Equivalent: You are the apple of my eye.

Translation: He who digs a pit for his brother falls into it.

English Equivalent: Whoever digs a pit will fall into it (, and a stone will come back on him who starts it rolling)

Literal Translation: He who desires the top must sit up many nights.

English Equivalent: The road to success is paved with hard work.

Literal Translation: When it comes to the stomach, the mind is lost.

English Equivalent: A hungry belly has no ears.

Literal Translation: One will not attain everything he wishes for. The winds blow unlike what the ships wish for.

English Equivalent: Man does not attain all his heart’s desires.

Literal Translation: Necessity is the mother of invention.

English Equivalent: Necessity is the mother of invention.

Literal Translation: The straw that broke the camel’s back.

English Equivalent: The last straw that broke the camel’s back.

Literal Translation: The rope of lying/lies is short.

English Equivalent: The truth will come out.

Literal translation: I hit two birds with a single stone.

Why are Arabic Proverbs and Sayings Useful?

The Arabic language is growing in popularity at the moment. It has over 420 million speakers globally and has become one of the quicker languages on the Internet. You will fall in love with Arabic when you learn  Arabic quotes with meaning and beautiful sayings in Arabic.

Let’s find out why we should study Arabic proverbs and famous Arabic quotes:-

Yes, more than 420 million people speak Arabic, making it a language that is widely spoken around the world.

Yes, there is a notable demand among Arabs and non-Arabs to study the Arabic language, as seen by the construction of Arabic language schools for non-native speakers in other countries and numerous institutes like Curiotory and websites.

There are various reasons to learn Arabic, including comprehending the Quran and the genuine Sunnah, as well as social considerations such as marriage, travel, and commerce. You might come across some of the best Arabic quotes during the process, which will make you love Arabic.