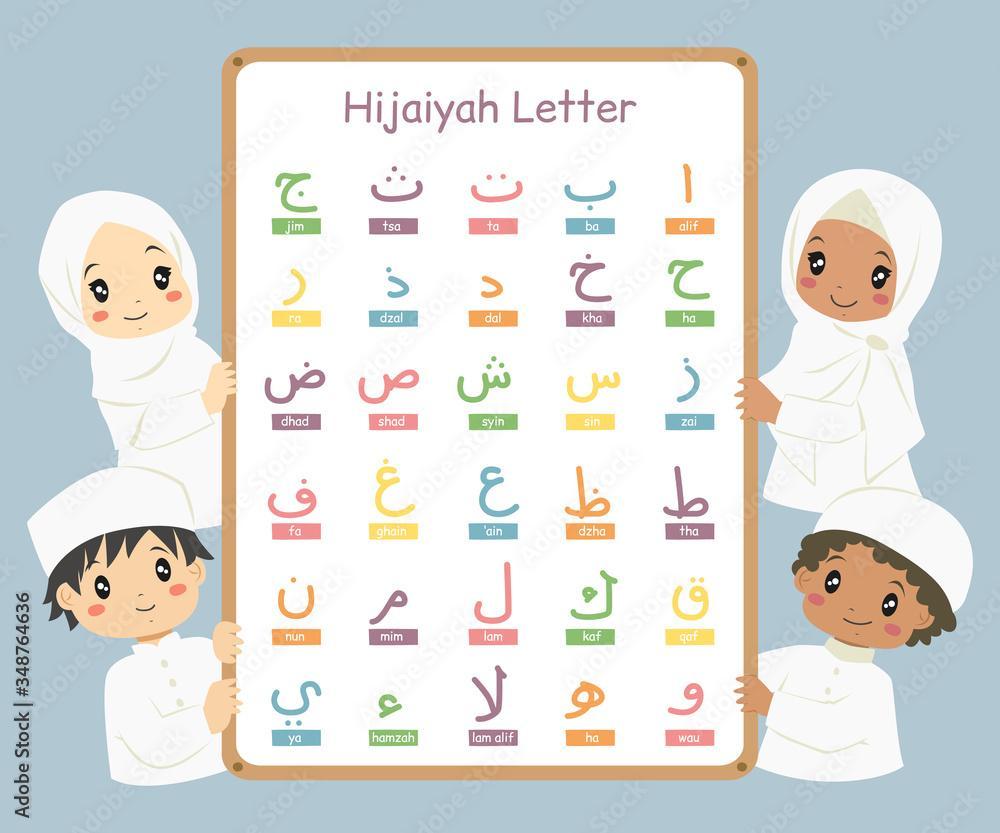 Learning the Arabic alphabet is a lot simpler than you may believe.

Compared to the Latin alphabet that English speakers are used to, writing the Arabic alphabet is somewhat different. All letters are written differently depending on where they appear in a word, are written from right to left, and have a very distinctive appearance.

Like the Latin alphabet, the Arabic alphabet letters do not use uppercase or lowercase letters. With a few exceptions, each letter can be written differently depending on where it appears in a word.

It will take some practice, definitely, but once you grasp a few fundamentals, you’ll see how easy it is to learn Arabic letters.

Many people use it to introduce any language by teaching its elements of speech, but it is a good place to start with the Arabic alphabet.

Being a phonetic language, Arabic is spoken as it is written with a few Arabic letter equivalents.

How to learn the Arabic alphabet?

There are a few guidelines you must follow, a lot of different letters, and it is written in a different direction.

Yes, it is laborious to learn the Arabic alphabet. Mastering it takes some more time. But that’s the only way to learn how to utilize it truly.

However, it’s not that challenging or at least not as challenging as you might think. This blog will discuss some of the most significant facts concerning the Arabic script.

How many letters does the Arabic alphabet have?

First, let’s review the complete Arabic alphabet. All 28 Arabic letters are displayed in the table below.

You may see the letter’s appearance in its “isolated” form (more on that later), its Arabic name, and an approximate translation of the letter’s sound into English.

Let’s have a look at the Arabic alphabet in English.

Arabic alphabet Chart and its Pronunciation

The Arabic script has 28 letters, as already mentioned. Therefore, they do not differ much from the 26 English alphabet letters!

Although the Arabic alphabet is the focus of this article, reviewing Pronunciation in this context is still helpful.

First off, there is no equivalent in English for several Arabic letters. The letter is a wonderful illustration. A guttural “halt” at the back of your throat best describes this sensation.

Additionally, the Arabic alphabet pronunciation in words is not always consistent. Similar to how English and pretty much every other language work.

How does the Arabic alphabet work?

The Arabic Alphabet’s Most Vital Elements

Next, let’s talk about the Arabic alphabet’s characteristics. Truthfully, none of these are all that challenging. But initially, they seem strange.

Arabic Is Written from Left To Right.

The first Arabic concept you need to know—and presumably already do—is this.

Most individuals are not used to writing from left to right, so it takes some getting used to it. However, like anything, the crucial components in this situation are time and experience. And you adjust to it really quickly. Additionally, despite reading from right to left, most languages still use the “one horizontal line at a time” method.

Words Made Up Of Arabic Letters

In other words, whether a letter is at the beginning (initial), middle (medial), or end (final) of a word in Arabic, it will appear differently.

Most letters don’t really alter in appearance much when they are changed. Most Arabic letters are relatively consistent, regardless of where they appear in a word. Nevertheless, some letters do adopt alternative formats.

Vowels Are Absent in Arabic

How long does it require to learn Arabic letters?

Due to a variety of factors, it is regarded as being exceptionally different from English (Grammar, more letters and Pronunciation, gender distinction, sentence structure…, etc.). Although there were several prospective students whose understanding of the language was extremely basic, they would undoubtedly require a lot of time to advance to an acceptable level.

You will need a teacher who will retain their attention on you for a long period to respond to your query without any background knowledge.

The selfish letters ا (alif), د (daal), ذ (dhaal), ر (raa), ز (zayn/zaa), and و (waaw) are the exception to this rule because they do not interact with others.